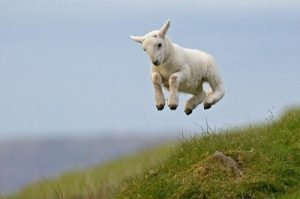 Most of us have heard of the parable of the lost sheep.  The shepherd left the 99 sheep to go look for the one lost sheep.  And if we relate that to church it would be our Pastor kind of leaving us to ourselves as he concentrates on that one lost soul.  What???  That’s a very risky move really.  Why in the world would our Pastor leave the flock to go help one person?  That’s just one person.  He has 99 others to tend to.  Think of what could happen in the church while the Pastor is away.  Surely the first thing would be all the talk.  People would try to figure out why that person left, what they did wrong, and when is the Pastor coming back.  Someone would decide they know better how to run things and begin to be the “person in charge”.  And what if that person doesn’t run it correctly?  We could have a full riot break out.  I’m sure people would start missing church.  I mean if the pastor isn’t there why should the people be there?  And those who do show up would start questioning things and there would be no one to give them the answers.  Standards would begin to fall away.  Prayer would dwindle.

Why would the pastor risk losing his entire congregation over one lost soul?

Why put the others in danger of losing out?

Outside of the obvious reason of wanting that one lost soul saved, there can only be one explanation as to why a Pastor would leave the 99.  He must have trusted the flock to do what they knew to be right until he returned.  He had taught them week after week this wonderful truth.  He gave of his time, his energy, his money, and his heart.  He knew that he had put enough of the Word into his flock that they could make it on their own until his return.  He had shown them the boundaries that would keep them safe and the flock had shown him that they accepted those and would remain until his return.

Which sheep are you?

When no one is around, can you be trusted to still do what the Word of God says?  If someone had to leave to help a lost soul, would you step up and live for God the way you know how and the way you’ve been taught?  Will you be the example that others need while the shepherd is away?  That one lost soul is worth every effort it takes to get them back.  The shepherd shouldn’t have to worry about the rest of the flock.  He should feel assured he can go after that one lost soul and know without a doubt the other 99 will still believe and hold strong to the doctrine, and live for the Lord while he is tending to the lost.  As sheep we should never hinder the work, but do our part to help our shepherd as he helps us.